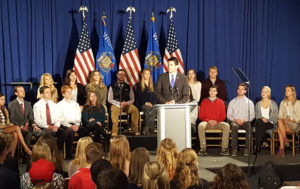 House Speaker Paul Ryan is keeping his promise to focus on the Congressional Republican agenda in the final days before the election.

Speaking to college Republicans from the UW-Madison for over 40 minutes on Friday, Ryan did not mention GOP presidential nominee Donald Trump once. Instead, he talked about what he described as the need to combat the effects of liberal progressivism on the U.S. government.

“Liberal progressivism simply does not work,” Ryan argued. “It is the longest con. It preaches to us about fairness while snuffing out the striving that is at the heart of a free society.”

Ryan said the House GOP wants a government that rewards innovation and empowers people to flourish and thrive. “That is why we are taking to the country a bold agenda…a better way that means less government and more freedom…less apathy and more ambition…a way that offers the best of what liberty produces,” he said.

The Janesville Republican took pre-screened questions from the crowd, which largely asked how he plans to achieve his agenda if Democrats control the presidency or the Senate. Ryan admitted that it will be difficult to even get a bill on the president’s desk if Democrats re-take control of the Senate. He told students that they should “do everything they can” to make sure Sen. Ron Johnson (R-WI) wins re-election against Democratic challenger Russ Feingold.

Ryan said earlier this week that he would not campaign for Trump or defend him, following the controversy set-off by the nominee’s sexually aggressive comments about women and almost daily reports this week about women coming forward to claim the businessman had inappropriately touched them.

Ryan quickly left the event at the Madison Masonic Temple without taking questions from the media.