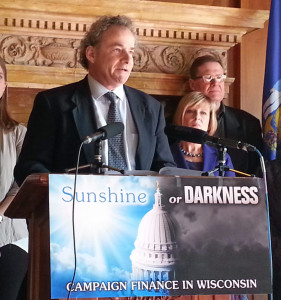 Matt Rothschild:”This is a field day for billionaires and politicians who are beholden to billionaires.”

The head of a state campaign finance watchdog group says the U.S. Supreme Court’s decision not to reconsider a decision to halt an investigation into Governor Scott Walker’s campaign means the public will likely know less about who is funding Wisconsin elections in the future.

The state Supreme Court originally halted the John Doe probe on the argument that there was nothing illegal about Walker’s recall campaign coordinating fundraising and messaging efforts with the Wisconsin Club for Growth, a conservative group running issue advocacy campaigns during the state’s historic wave of recall elections. Prosecutors appealed, but the U.S. Supreme Court on Monday declined to hear the case – exhausting their last legal option to pursue the issue.

Wisconsin Democracy Campaign executive director Matt Rothschild says allowing that original ruling to stand means corporate donors now have little incentive to give directly to candidates anymore, since they can now give to outside groups that can coordinate with candidates while not being subject to the same disclosure requirements. “This is a field day for billionaires and politicians who are beholden to billionaires…and it’s a nightmare for people in Wisconsin who want to know who is trying to buy off our politicians,” Rothschild argues.

Rothschild says the long term effect of the decision is that meaningful campaign contribution limits in the state are largely meaningless. For example, he says current law would cap donations to a candidate for governor at $20,000. However, a candidate could now tell that same donor to just give that money to an issue advocacy group they are working with, which will not be capped or reported. “It will be exactly as if you gave me that money directly, but I won’t disclose or that outside group won’t have to disclose that you gave them a dime.”

Defenders of the State Supreme Court’s decision to halt the John Doe have argued it was motivated by partisan politics, and that no campaign finance laws were broken by anyone involved. Governor Scott Walker said in a statement released Monday that multiple judges and courts came to that conclusion, while ordering that the investigation was without merit and should be ended. “I applaud the individuals and organizations who fought for and successfully defended their First Amendment rights against political opponents who wanted to silence them,” Walker said.