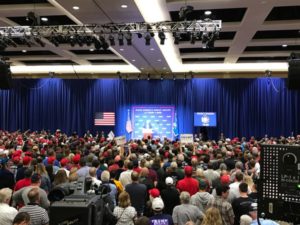 The sometimes controversial candidate rallied with supporters at the K.I. Convention Center, where he reiterated many of this campaign promises – including providing more jobs for Americans, building a wall along the Mexican boarder, and ending illegal immigration.

He also blamed the media for being part of what he calls the “rigged” election process. “The media is trying to rig the election by giving credence to false stories that have no validity.”

Trump says it’s important that U.S. companies keep their jobs within America’s borders. “They’re taking our jobs away, they’re going to Mexico. They’re going all over the place. We are going to keep our companies here folks. They’re not leaving. If they want to leave, there will be consequences. You understand.”

At least two protesters were escorted out of the event and one person had a medical emergency.

So, how are Wisconsinites feeling about the Republican candidate?

Kelly Ruh of Green Bay thinks Trump is getting a raw deal when it comes to media coverage. “It think people these days just go by sound bites and what they’re hearing on radio and TV and the little blurbs they read online, instead of digging for the facts.”

Ruh says despite all the controversy surrounding his campaign, Trump will have her vote next month. “He’s the candidate who represents my beliefs and what I see is the real need in this country. I’ve got concerns with our national security, with our debt, with our military.”

Jack Wojcik of Pulaski says he’s had enough of Bill and Hillary Clinton. “I’m just sick of the Clinton’s. I wish someone would just flush them down the nearest toilet and be done with them.”

Officials estimate around 3,000 people were in attendance for Trump’s second rally in Green Bay.

According to the latest Marquette University Law School poll, Trump had the support of 37 percent of likely Wisconsin voters compared to Democratic nominee Hillary Clinton’s 44 percent.

The final presidential debate against Democratic opponent Hillary Clinton will take place on Wednesday, October 19 at the University of Nevada in Las Vegas at 8 p.m.

Hours before Trump took to the stage, Democratic leaders criticized the nominee and called on Wisconsin Republicans to withdraw their support for his candidacy.

“We have seen over the last year how dark his soul is, now we’re seeing just how dangerous he is as a man and certainly on the ballot as a potential president and commander-in-chief,” says U.S. Senator Tammy Baldwin (D-Wisconsin). “Too many of our Republican leaders in this country are failing a moral test.”