You are here: Home / Badgers / Badgers settle for too many three’s, fall to Creighton 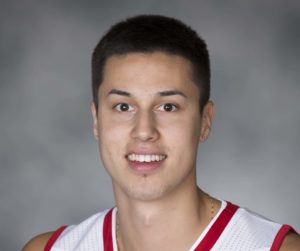 The 9th ranked Wisconsin Badgers took to the road for the first time this season, taking on Creighton in the Gavitt games in Omaha.  It didn’t end well.

Creighton’s defense took Wisconsin’s Ethan Happ out of the game, forcing double teams every time Happ touched the ball.  The Badgers countered by taking 39 three-point shots and made just 11.  They attempted just 24 two-point shots and only five free throws.

In two games so far, the Badgers have attempted 68 threes and 48 two-point shots.

Bronson Koenig had 21 points to lead the Badgers.  Nigel Hayes added 16 and the Badgers fell to 1-1.

The Badgers led by six in the first half, but closed out by going 2 for 16 from the field, including 0 for 12 from three-point range.  They failed to score in the final 4:40 of the first half.

The game was the first of five games in eight days.  The Badgers will return home to host Chicago State on Thursday night at the Kohl Center.

AUDIO: Greg Gard said his team didn’t get to the basket enough :13

AUDIO: Greg Gard says it was a good effort, but not enough :19