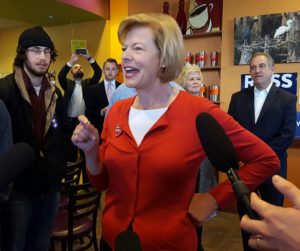 Senate Democratic Leader-elect Chuck Schumer announced Wednesday that Baldwin will serve as the Senate Democratic Conference Secretary. The appointment comes as Baldwin gears up for her reelection bid in 2018 – an election that is sure to see Democrats hoping to take back portions of U.S. government control from Republicans.

In a statement, Baldwin said she is proud to have an opportunity to join the leadership team.

“Too many Americans feel like they are being left behind. We need to change that and I am focused on making a difference in people’s everyday lives,” Baldwin said. “The Republican establishment now owns Washington. Corporate lobbyists, big banks, and Wall Street are calling the shots and writing the rules to make a rigged system work for them. I have never been afraid to stand up to these powerful interests in Washington and I will continue my fight for the people of Wisconsin to build an economy that works for everyone, not just those at the top.”