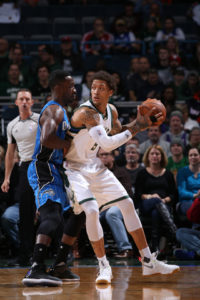 The Milwaukee Bucks started slow, falling into a 16-2 hole but finished strong and ended their three game losing streak, pulling out a 93-89 win over the Orlando Magic at the BMO Harris Bradley Center on Monday night.

Giannis Antetokounmpo recorded his first triple-double of the season with 21 points, 10 assists and 10 rebounds.  Jabari Parker had 22 points, hitting a career-high five three-pointers in seven attempts.

After the slow start, coach Jason Kidd went to his bench quickly and got a big contribution from Michael Beasley, who hit five of six shots and scored 10 points in the first quarter.  Beasley finished with 14 points.

AUDIO: Jason Kidd said it was a team effort :10

The Bucks are off until Friday night when they host Toronto at the Bradley Center.