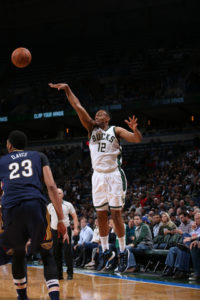 The New Orleans Pelicans found the perfect hosts.  They ended their eight game losing streak to start the season, knocking off the Milwaukee Bucks 112-106 on Thursday night at the BMO Harris Bradley Center.

Anthony Davis poured in 32 points and got help from E’Twaun Moore (20 points) and Tim Frazier (15 points and 10 rebounds) in getting New Orleans (1-8) its first win of the season.

Jabari Parker scored a season-high 33 points and nine rebounds for the Bucks (4-4), three points shy of his career mark of 36.

The Bucks fell behind by 15 points in the second half and couldn’t quite climb all the way back.  They lost to a winless team for the second straight game.

The Pelicans ended the first half on a 9-2 run and took a 61-54 halftime lead.  They eventually fell behind by 15 before mounting a comeback.

The Bucks climbed to within two points with 12.1 seconds left before the Pelicans pulled away at the free throw line.

The Bucks return to the court on Saturday, playing host to Memphis at the BMO Harris Bradley Center.