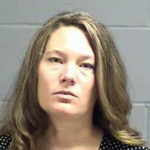 A sheriff’s detective in charge of the Oneida County drug unit has been arrested on suspicion of stealing money from confidential funds. The investigation of Detective Sergeant Sara Welcenbach was turned over to sheriff’s departments in Wood and Portage counties and the state attorney general, according to Oneida County Sheriff Grady Hartman. Welcenbach allegedly stole funds between 2010 and 2014.

“Sara Welcenbach has not only been alleged to have stolen money, she also violated our trust, and the public’s trust. She has tarnished the badge of every sworn officer who has promised to protect and serve,” Hartman said in a press release. Hartman said the theft was revealed in an audit this year.