You are here: Home / News / Duffy, Hoeft debate in Wausau 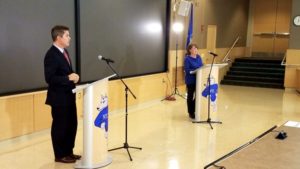 The Republican Duffy, who represents the state’s 7th Congressional District, is seeking a fourth term in the U.S. House of Representatives. Hoeft is a professor of Communication Arts and French at the University of Wisconsin–Barron County in Rice Lake.

On raising the minimum wage, Duffy said he wants to work to get people the skills to move up the economic ladder and away from minimum wage jobs. “Those who say, ‘I want to raise the minimum wage,’ that’s great, but then they also say, ‘I want to tax you more. I want more rules and regulations from Washington that are going to coast you more to comply with,'” said Duffy. “Let’s take this burden off of our small businesses, let’s cut them a break.”

Hoeft supports a plan for a government subsidy for small businesses that would be deeply affected by a minimum wage increase.  She said, “Wisconsin ranks number one among all fifty states in the most rapidly disappearing middle class. We have a minimum wage that is a guaranteed poverty wage.”

On term limits in Congress, Hoeft thinks it would limit the amount of good work a leader could do, using former Rep. Dave Obey as an example.  “I don’t think the answer is term limits, instead, it’s getting money out of politics. It’s getting rid of Citizens United. It’s putting a limit so that Sean and I, either one of us, can’t spend more than $100,000 on this campaign, and then we work for you.”

Donald Trump has said he wants to “drain the swamp” by advocating for term limits.  Duffy is agreeing with his party’s Presidential nominee on this one.  He said, “I support legislation on term limits, or a Constitutional amendment on term limits, whether it’s ten, twelve sixteen years. I think it’s important to move people through the system.”

One of the few personal attacks came from that topic of campaign finance. Representative Duffy said there’s only been one “dark money” ad in this race, and it was run against him, without objection from Mary Hoeft. “You can’t come in here today and say, ‘Hey, everyone, I don’t like dark money ads, unless they’re being run against Sean Duffy.’ That doesn’t work. If you’re opposed to it, be opposed to it every moment of the day,” he argued.

Hoeft fired back at Duffy’s role on the House Committee on Financial Services and his acceptance of donations from banks like Wells Fargo, referring to the bank opening some two million new accounts in names of customers without their permission.

The final debate between the candidates is Friday night in Hayward.