You are here: Home / Education / Evers seeking boost in funding for Wisconsin schools 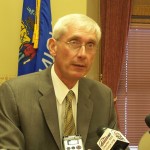 State Schools Superintend Tony Evers has submitted his biennial budget to the governor and legislature. Evers is asking for a $525 million increase in general aid, a funding increase of 2.7 percent in the first year of the biennium and another 5.4 percent in the second.

“A lot of it is for our fair funding plan which school districts across the state support, and want me to keep pushing the envelope here,” Evers said.

Evers said he’s hopeful the plan will be well received in the legislature — where GOP leaders have already indicated that K-12 funding is a priority.

“We’ll see whether people want to take a big bite and make sure that all our schools are taken care of by changing the funding formula” said Evers. “I feel confident we’ll find some common ground.”

The plan also includes $5.5 million in the second year to help rural schools to retain their teachers, and greater flexibilities on how districts handle summer school.

“We’re looking to change some rules around that and also beef that up. That is low hanging fruit in my opinion and school districts are looking for leadership from the state on that,” Evers said.

Evers also said last week’s referendum results around the state give him some optimism.

“We had lots of people voting for president-elect Trump because they thought there should be some change. In that same election 55 school districts said ‘we’re going to tax ourselves more – 800 million dollars more – to keep our schools open and thriving.'”

Evers now has four challengers in a primary for reelection next February.