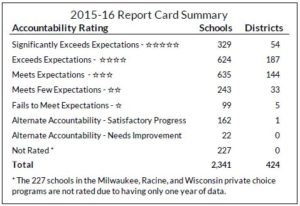 New report cards released by the Wisconsin Department of Public Instruction show five districts in the state and 99 schools all received failing grade during the 2015-2016 school year.

The Cambria Friesland district had the lowest performance score in the last school year – 46.5 on a scale of 100 – and the Bayfield, Cassville, Racine, and Menominee Indian districts also failed to meet expectations. Most of the failing schools are in Milwaukee and other high poverty areas of the state.

Under the system, schools can face sanctions if they receive a failing grade for two years straight.

More than 82 percent of schools and 91 percent of districts scored three stars or better under the five-star system, which means they met or exceeded expectations.

This year is considered a reset for the state report cards, due to major changes that were made in measuring student achievement through the 2015 state budget. No report cards were issued last year, and DPI says the current results are no comparable to ratings from previous years.