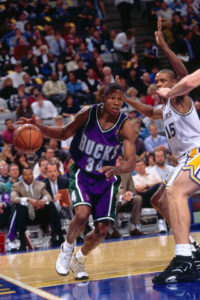 The NBA’s all-time leader in three-point field goals is 41-years-old and hasn’t played since the 2013-14 season with Miami, but he had kept open the possibility of a return during the past two seasons.

Allen played his first seven NBA seasons with the Bucks before being traded to Seattle for Gary Payton and Desmond Mason.

Allen flourished after the trade, playing with the Sonics, the Boston Celtics and Miami Heat.  He won a pair of NBA titles, one with Boston in 2008 and the other in Miami in 2013.

The Bucks originally traded for Allen on draft night in 1996.  The Bucks selected Stephon Marbury with the fourth overall choice and Minnesota selected Allen with the fifth pick.  The two teams then swapped picks in a trade, bringing Allen to Milwaukee.