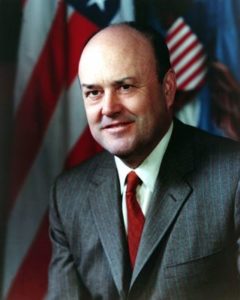 Wisconsin is mourning former U.S. Defense Secretary Melvin Laird, after the Marshfield native died Wednesday at the age of 94.

Laird was a GOP congressman in the state’s 7th District for 17 years before President Richard Nixon named him to run the Pentagon in 1969 — and in the next four years, Laird carried out Nixon’s policy of withdrawing U.S, troops from Vietnam. He also suspended the draft in 1973 and made the military an all-volunteer force.

Laird was in the Wisconsin Senate before heading to Capitol Hill, where he played a key role in developing health research — including the start of the Centers for Disease Control and an expansion of the National Institutes of Health, and a large medical research facility at his hometown Marshfield Clinic is named in Laird’s honor.

The Fine Arts building at the two year UW college in Marshfield is named for his mother Helen Connor Laird, and former campus dean Carol McCart says Marshfield is proud of one of its favorite sons, never wavering in his support for education.