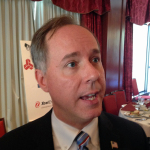 While Wisconsin’s early voting record has been broken, the leader of Republicans in the state Assembly is pledging to put some limits on early voting in the state. Assembly Speaker Robin Vos has told the Associated Press that he hopes to pass legislation next session to standardize and restrict early voting to make it more similar in rural and urban areas.

Jay Heck with Common Cause in Wisconsin notes a federal judge has already weighed in efforts to do that. “Hours that have been restricted have been reinstated, and we’ve had early voting for a month before November 8th, and that means that more people have had an opportunity to vote,” Heck said.

Judge James Peterson issued a ruling in July that struck down multiple laws passed by the Republican controlled Legislature since 2011. Peterson rejected the reasoning given for several of the changes, saying “the purported justifications for these laws do not justify the burdens they impose.”

According to the state Elections Commission, 797,740 people had returned absentee ballots to municipal clerks as of Monday morning, topping the 664,597 ballots returned in 2012.

Vos, who told the AP that he thinks proposed legislation can be worded to stand up to legal challenges, called Peterson’s ruling a “liberal judge’s attempt to undermine our elections less than four months out.” Vos argued that the laws “do not disenfranchise voters; they protected the integrity of our elections and people’s right to vote.”