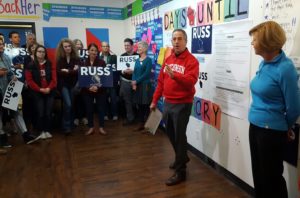 Wisconsin’s U.S. Senate race is entering the final stretch, as both candidates hit the campaign trail Monday for one final day of urging voters to get out to the polls on Tuesday.

The race has become extremely tight in recent weeks, with the most recent Marquette University Law School poll showing Democrat Russ Feingold leading incumbent Republican Senator Ron Johnson by just a single point. Feingold, who has been in the lead for much of the campaign, is looking to reclaim the seat he lost to Johnson in the 2010 election.

During a stop in Madison Monday morning to encourage campaign volunteers, Feingold said he wasn’t surprised by how narrow the race has become. “This state’s evenly decided…the only thing Senator Johnson and I have always agreed on is the race is gonna be close, but we’re going to win,” Feingold said.

Sen. Johnson launched a statewide bus tour last week, which he planned to wrap up Monday with stops in Oshkosh and Waukesha. Johnson’s campaign maintains that he has the momentum heading in to Tuesday’s election, and that voters will “fire Feingold” for good after Tuesday’s election.

Both candidates have pulled in big names to campaign with them in the final days of the campaign. Feingold was on stage this weekend with Democratic vice presidential candidate Tim Kaine and U.S. Sen. Tammy Baldwin (D-WI). Johnson was joined by Republican vice presidential nominee Mike Pence, House Speaker Paul Ryan (R-WI), and Republican Governor Scott Walker at campaign stops around the state.