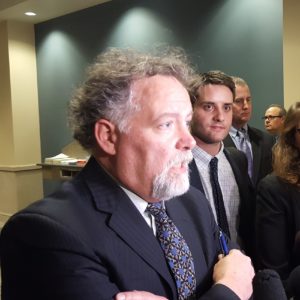 County clerks in Wisconsin will be able to use machines to help with a recount of the state’s presidential vote, after a Dane County judge on Tuesday denied Green Party presidential candidate Jill Stein’s request to order that the process be done by hand.

Stein’s campaign produced multiple experts who testified about the possibility voting machines could have been hacked or tampered with, potentially changing the outcome of the vote in Wisconsin. They also pointed to statistics that may show irregularities in how votes were counted.

The state countered that there’s no actual evidence to back up their claims though or that shows a hand recount would substantially change the outcome of the election, which the state requires before one can be required. Assistant State Attorney General Mike Murphy noted in court that “not one of the experts testified that they know of a problem with the Wisconsin election tabulating system or equipment…in fact, every one of the confirmed the opposite.”

Circuit Judge Valerie Bailey-Rihn said that, while she agrees a hand recount should be the “gold standard” for ensuring the integrity of the vote, the campaign failed to meet the requirements under state law that would allow her to mandate one. “Experts have said there is a chance that the machines could have been hacked or that there are other problems with the machines that they don’t read correctly…all of which may be true, but there’s nothing to link it to Wisconsin,” she said while denying the request.

Attorney Matthew Brinckerhoff, who represented the Stein campaign in court, maintained that failing to do a hand recount will result in continued questions about the vote totals. He urged clerks to consider doing a one anyway.

AUDIO: Attorney Matthew Brinckerhoff calls on clerks to do a hand recount (:23)

Brinckerhoff said a decision had not yet been made about an appeal, but noted the tight timeline the campaign would face. The recount is expected to begin on Thursday.

State election officials say 19 of the state’s 72 counties currently plan to use machines for at least part of the process. Many of the others have already indicated they plan to do their recounts by hand.