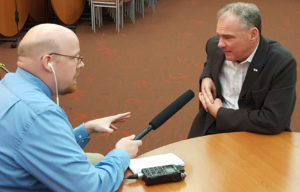 While recent polling has shown Clinton leading against Republican presidential nominee Donald Trump, Kaine said in an interview with WRN that Wisconsin is one a handful of states that can help put the election in her favor. “This is one of those six or seven states at the end that, if we win Wisconsin, it really accelerates our path to victory and it’s extremely difficult for the other guys to win if they lose Wisconsin.

Kaine made a campaign swing through the state on Tuesday, rallying with supporters on college campuses in Appleton and Madison to stress the importance of early voting. As of Tuesday, 518,643 absentee ballots had been cast in Wisconsin. Of those, 396,585 were cast in person, according to the Wisconsin Elections Commission. “Polls can be wrong, but the early voting data usually isn’t wrong, and it really helps us have a better sense for how we’re doing,” Kaine said.

Trump was also in the state Tuesday, for a rally in Eau Claire.

While Clinton has enjoyed a polling advantage in the state, a Marquette University Law School poll released last month showed 66 percent of likely voters would not describe her as trustworthy…an issue punctuated by news last week that potential new emails had been found in connection with a probe into her use of a private server while she was secretary of state. Kaine defended the character of his party’s nominee, arguing that she has a passion for empowering families and children. “That has been the consistent theme since she’s been a teenager.”

Kaine argued Trump only has a passion for himself. “The nation has never had a great president who put himself first.”
Kaine downplayed the significance of the letter from FBI Director James Comey, saying that their polling shows most people who care about the scandal were not planning to vote for Clinton anyway. “Most people, what they’re really are interested in…is how do you grow an economy for everyone? How can we be safe?”

The Clinton campaign has criticized Comey for not releasing more information to clarify the significance of the emails, along with the decision to write to Congress about the issue less that two weeks before the election.

Following Tuesday’s events, both campaigns are maintaining a strong presence here. Trump’s campaign says he plans to be back in the state before the election, although it has not said where. Democrats will have Chelsea Clinton and Vermont Senator Bernie Sanders making stops here.

While the nominee herself has not yet announced any plans to visit Wisconsin, Kaine said Vice President Joe Biden may make an appearance before next Tuesday. Clinton has not campaigned in the state since before the state’s presidential primary in April.