You are here: Home / News / Madison leaders address concerns of immigrants and minorities Madison leaders are addressing the concerns of immigrant and minority communities in the wake of Donald Trump’s election. Mayor Paul Soglin says the city won’t change any policies or procedures regarding how it deals with immigrants who might be here illegally.

Police Chief Mike Koval says his officers are not compelled to check the immigration status of the people they interact with.

“If there are people who are feeling disenfranchised or marginalized, than arguably those same folks will be less likely to report as victims of crimes, or will under report crimes, because they’re worried about even being named as a complainant,” Koval said during a press conference on Wednesday.

Madison Alder Samba Baldeh is an immigrant and a Muslim who says members of those communities are fearful. “I have heard from parents who have told me that their kids went to school and they were told ‘now that Donald Trump is president, you will be deported, you will be sent home,'” he said, adding that the fear even extends to immigrants who have attained U..S. citizenship. 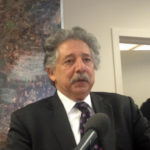 “An inclusive community means economically, it means socially, it means in all aspects of our life,” Soglin said. “We have to know one another.”