You are here: Home / News / Paul Ryan says his relationship with Trump is fine (AUDIO) 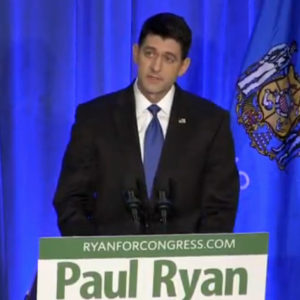 House Speaker Paul Ryan is excited about the prospects of single party government in Washington, D.C. Ryan — who kept President-elect Donald Trump at arm’s length throughout the campaign — was effusive in his praise of Trump during a media briefing in Janesville on Wednesday.

“I think what Donald Trump just pulled off was an enormous political feat,” Ryan. “He heard those voices out there that other people weren’t hearing, and he just earned a mandate.”

Trump actually lost the popular vote to Hillary Clinton, but won the Electoral College including Wisconsin’s 10 votes. Ryan’s support of Trump has been tepid — he never appeared in a campaign event with Trump and didn’t even mention Trump by name during a radio interview on Monday — but he insists it’s all good.

“Donald and I have had fantastic conversations, just in the last 18 hours,” Ryan said. “Mike Pence and I had a great conversation about the transition meeting.”

Ryan said that the new Congress will be ready to send a bill repealing Obamacare — which currently covers 20 million Americans — to President Trump. He’s also enthusiastic about rolling back the regulatory state. “Think about the laid-off coal workers now who see relief coming. Think about the farmers here in Wisconsin who are being harassed by the EPA in the waters of the USA. Think about the ranchers in the West who are being harassed by the Interior Department, or the laid off timber workers.

The new Congress won’t convene until January 3rd, but the lame-duck Congress will return to Washington next week and Republicans are set to begin the process of picking leaders in the House and Senate. Ryan’s position as speaker could be challenged by Republican conservatives who backed Trump while Ryan withheld support.