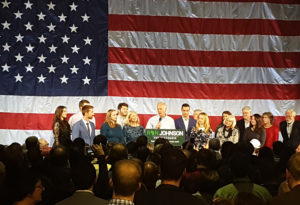 The Republican Johnson came out on top in a rematch against Feingold in Tuesday’s election, holding on to the seat he took from the Middleton Democrat in the 2010 election. Speaking to supporters in Oshkosh Tuesday night, Johnson called his victory a “big night for Wisconsin…a big night for America.”

Despite trailing behind Feingold for much of the campaign, Johnson seemed to pick up momentum in recent weeks as Election Day drew near. A Marquette University Law School poll released last week showed Feingold’s lead was down to just a single point. In Tuesday’s voting though, unofficial returns had Johnson winning by almost five percentage points.

AUDIO: Sen. Ron Johnson talks about the turning point in the race for him (:52)

While conceding the race, Feingold admitted to being surprised by the results of the race. “I didn’t expect this outcome, to be honest with you,” he told supporters gathered in Middleton.

Feingold said he doesn’t completely understand what’s happening in the country. “I would urge you to be as restrained as you can be as the next steps occur,” he said, adding that “this could be one the most challenging times in the history of our country.”

Feingold challenged the young people who worked on his campaign to “heal the wounds” and “bring us together.”

However, Johnson said voters were giving Republicans a chance in Tuesday’s election to put America back on the right path. He said the way Congress does that is by focusing on areas of agreement between both sides…the goal of having a “safe, prosperous, secure Wisconsin and America.”

WRN’s Bob Hague and Terry Bell contributed to this report.