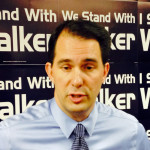 Scott Walker still loves being governor. The Republican governor dropped hints during a Faceook live chat on Thursday that he’ll run for a third term in two years.

Walker says he loves being governor, and that’s why he won’t take a position with president-elect Donald Trump’s administration. Walker says his current focus is on workforce issues, and that his number one priority is making sure Wisconsin residents “get the education and training they need to succeed,” according to the Wisconsin State Journal.

Walker said in his new role as chairman of the Republican Governors Association he will be advocating that Trump send more power back to the states, including by canceling President Barack Obama’s executive orders, such as regulations aimed at cutting carbon emissions.