You are here: Home / News / 2016 in review: Wisconsin’s presidential primary 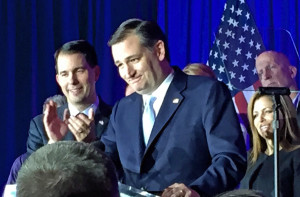 During the hotly contested presidential primary season, Wisconsin found itself at the center of the battle for both the Democratic and Republican nominations.

For Democrats, Vermont Sen. Bernie Sanders focused on the state as part of his efforts to overtake eventual nominee Hillary Clinton, while many in the Republican party argued the state was a “must win” for Texas Sen. Ted Cruz as he sought to stop the advance of billionaire Donald Trump to the nomination.

The race was also rough for Wisconsin Governor Scott Walker, who had dropped out of contention for the nomination some seven months before the primary. While he held off on backing another candidate for several months, the governor eventually endorsed Cruz in March, telling reporters he was the best hope of the party winning back the White House. “Right now, only Ted Cruz fits that position…to win the nomination and to ultimately defeat Hillary Clinton,” Walker said.

The governor’s backing of Cruz gave Trump an opportunity to go after both men, which he did during his first campaign visit to Janesville in the spring. “We have to put these politicians in their place,” Trump said. “Cruz likes to pretend he’s an outsider, but in the meantime he gets all the establishment support.”

Trump wasn’t the only one taking shots at Walker — Democratic presidential hopeful Bernie Sanders also criticized the Republican Governor. “You have a governor who appears to be working overtime trying to suppress the vote,” Sanders said during a rally in Madison in late March. “That is an absolute outrage.”

On the eve of the primary vote, Trump claimed polls showing Cruz in the lead were off, but he was proven wrong when Cruz won the state with 52 percent of the vote. However, his Wisconsin victory proved to be his campaign’s high water mark, with Trump going on to win several more states – then eventually the nomination and the presidency.

On the Democratic side, Sanders won the state with 59 percent of the vote, compared to Hillary Clinton’s 38 percent. Clinton went on to win the nomination.

The number of voters who turned out to cast ballots in the presidential primary – just over 47 percent.