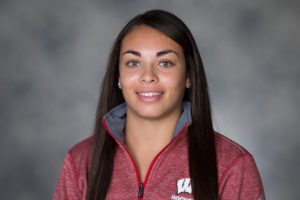 The top-ranked Wisconsin women’s hockey team dropped their series opener against second-ranked Minnesota 2-0 on Saturday.  The Badgers rebounded Sunday with a 8-2 rout over the Gophers before a sold out LaBahn Arena.

Senior forward Sarah Nurse tallied her second hat trick of the season for the Badgers (15-2-1, 11-2-1-1 WCHA).  Nurse scored twice in the opening period.

Junior Baylee Wellhausen recorded her third multi-goal game of the season with a pair of goals.

Senior Ann-Renee Desbiens earned her 12th win of the season, stopping 23 of the 25 shots she faced.

Wisconsin hits the road next weekend, traveling to Ohio State to wrap up the 2016 calendar year.