You are here: Home / News / Barca has no plans to run for governor 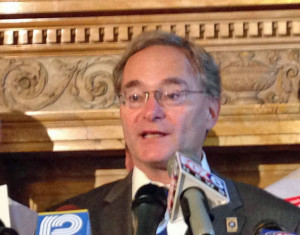 The leader of Democrats in the state Assembly has no plans to run for governor. Representative Peter Barca of Kenosha says he’s focused on his job leading minority Democrats.

“I don’t have any campaign committee or any effort underway whatsoever to look at a statewide race at this juncture in my life,” Barca said.

While Barca is not interested, he noted that several other Democrats have been mentioned as potential candidates for 2018.

“You could have a very broad primary for governor this time, and that may be exactly what’s needed,” Barca said. “Sometimes having large primaries, candidates catch fire and the public becomes aware of them.”
Governor Scott Walker says he’s putting off a decision on seeking a third term until after the next state budget is passed.

Governor Scott Walker is putting off a decision on a third term until after the next state budget is passed.

Assembly Democrats voted last month to retain Barca in the leadership role, with no members running in opposition. He has held the position since 2011, after Democrats lost control of both chambers and the governor’s office.