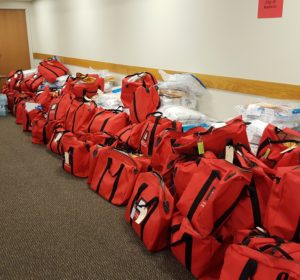 A federal judge has denied a request to stop Wisconsin’s recount of its presidential ballots.

In an order issued late Friday afternoon, U.S. District Judge James Peterson denied a motion to temporarily halt the recount while he considers a lawsuit filed by a man who voted for President-elect Donald Trump and two pro-Trump political action committees. Peterson wrote that those behind the lawsuit had not proven they would be “irreparably harmed” by allowing the recount to continue until briefs are filed and a hearing is held.

Peterson has scheduled a December 9 hearing for the lawsuit, which will take place just three days before the deadline for county clerks to complete the recount.

The lawsuit argues the recount risks invalidating Wisconsin’s 10 electoral votes and violates the equal protection clause of the Constitution, because of the short time frame clerks have to complete the process and because Wisconsin lacks a uniform system for recounting its ballots. Clerks across the state are using a mix of hand and machine-reliant methods to verify the ballots cast in the November 8 election.

The recount, which began on Thursday, was requested by Green Party presidential candidate Jill Stein. Her campaign is also funding the process.