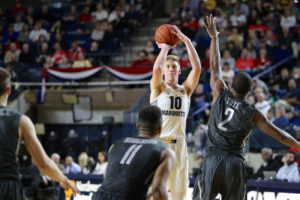 Freshmen Sam Hauser and Markus Howard combined for 34 points to lead the Marquette Golden Eagles to a 89-79 win over the Georgia Bulldogs in men’s college basketball in Athens, Georgia on Sunday.

Hauser and Howard combined to hit seven of the team’s 13 three-pointers.

Hauser finished with 19 points on 7-of-10 shooting from the field.  Howard added 15 points on 5-for-9 shooting.  Together, the freshmen duo played 50 minutes and committed just one turnover.

It was Hauser that responded in the second half with several key plays after the Bulldogs cut Marquette’s 16-point lead down to two.  He triggered an 11-0 run as the Golden Eagles pulled away.