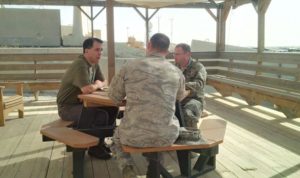 Gov. Scott Walker meets with members of the WI National Guard stationed in the Middle East.

Walker’s office says he will travel Thursday to the U.S. naval base at Guantanamo Bay, Cuba, where he will meet with members of the Milwaukee-based 32nd Military Police Company. The governor will be joined by Major General Donald Dunbar, the state’s Adjutant General.

Walker traveled to the Middle East earlier this month, where he met with Wisconsin troops stationed in Afghanistan and other countries.