You are here: Home / Packers / Packers one step away from NFC North title (AUDIO) 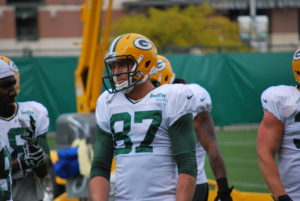 The fans chanted “MVP, MVP” for quarterback Aaron Rodgers.  The Packers quarterback played his best game of the season, leading Green Bay to a 38-25 win over the Minnesota Vikings on Saturday at Lambeau Field.

Rodgers passed for 347 yards and four touchdowns and rushed for another score to lead the Packers.

Rodgers hooked up with his favorite target, Jordy Nelson, for 154 yards and two touchdowns on nine receptions.  The two touchdown catches gave Nelson an NFL-leading 14 for the season.  He and Rodgers have now teamed up for 59 career TD passes, setting a franchise combination record.  They had shared the record previously with Brett Favre and Antonio Freeman with 57.

The Packers quarterback gave Packer nation a scare when he was sandwiched by Viking defenders Danielle Hunter and Eric Kendricks.  Rodgers laid on the ground for a while before being helped to his feet.  He had suffered a stinger, the first of his career.

Rodgers said his calf injury was no worse than it was before the game.

Defensively, the Packers got a big performance from Clay Matthews for the first time in weeks.  Matthews made the game changing play defensive coordinator Dom Capers was hoping he’d get after the Packers staff decided to keep playing Matthews despite a separated shoulder.

Matthews didn’t register a single defensive stat in two of the last three games, but Sunday against the Vikings he had a strip sack of quarterback Sam Bradford.  He also had two pass deflections, three tackles and three quarterback hits.  He also drew a holding penalty against a Vikings offensive lineman.

The Packers secondary took another hit when corner LaDarius Gunter left the game with an elbow injury.  He’ll be further examined on Monday.

Sam Bradford completed 34 of 50 for 382 yards, three touchdowns and no interceptions.  His favorite target was Adam Thielen, catching 12 passes for 202 yards and two touchdowns.  That has to be a concern for the Packers moving forward.

But for now, the Packers (9-6) earned their fifth straight victory and sets up a winner-take-all contest next Sunday at Detroit (9-5) for the NFC North Division title.  The Lions will play at Dallas on Monday night.

The loss eliminated the Vikings (7-8) from playoff contention in the NFC.  They’ll close out their season against the Chicago Bears this week.

AUDIO: Jordy Nelson is honored to play with Aaron Rodgers :14