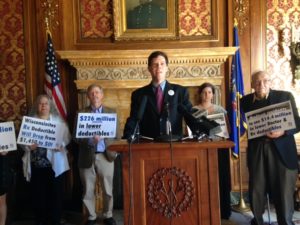 Health care “hyperinflation” continues to be an issue in Wisconsin, according to the annual Health Insurance Cost Ranking report released by Citizen Action of Wisconsin.

“We have data in the large group market back to the year 2000,” said Robert Kraig with Citizen Action. Kraig cited a “dramatic increase” in which premiums and deductibles increase by 226 percent statewide, with even greater variations within regions.

Nationally, some 22 million people could lose coverage if the Affordable Care Act is repealed by Congress and the incoming Trump administration.

“There are some Trump supporters I do believe who voted against their self-interest on this particular issue,” said state Senator Jon Erpenbach, a Dane County Democrat. “They may like the idea of repealing Obamacare, but at the same time of them actually use the Affordable Care Act to get their insurance.”