You are here: Home / News / Shilling not running for governor in 2018 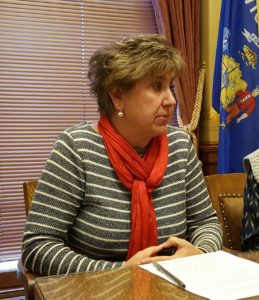 The top Democrat in the state Senate says she has no plans to run for governor in 2018.

State Senate Minority Leader Jennifer Shilling tells the La Crosse Tribune that she’s committed to rebuilding a majority that focuses on jobs, infrastructure, and schools to try and win her party’s voters back. She told the paper she is “flattered” to be mentioned as a possible contender for governor, but there will be other opportunities.

The La Crosse Democrat narrowly won re-election this fall, in a rematch against Republican Dan Kapanke. The race resulted in a recount, with Shilling holding on to her seat with just a 61 vote margin out of almost 90,000 ballots cast.

Republican Governor Scott Walker has not yet said whether he plans to seek a third term, although he has hinted it’s a possibility.