You are here: Home / Sports / Spurs escape with victory over Bucks 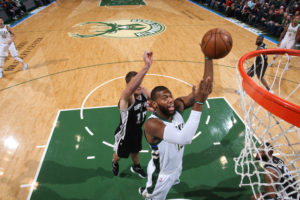 The San Antonio Spurs kept their unbeaten streak on the road intact on Monday night, escaping the BMO Harris Bradley Center with a 97-96 win over the Milwaukee Bucks.

The Spurs (17-4) came from 15-points down in the second half to improve to 12-0 on the road this season.  That’s two games shot of the record 14 straight road wins to start a season, set by the Golden State Warriors last season.

The Spurs scored the game winning points with 21 seconds left when Giannis Antetokounmpo was called for goaltending of a blocked shot.  The Bucks had one chance to win, but Mirza Teletovic’s three-point attempt from the corner was off the mark.

Jabari Parker led the Bucks with 23 points and eight rebounds.  Antetokounmpo had 22 points and 11 rebounds but spent time in the fourth quarter on the bench with foul trouble.

Kawhi Leonard had 21 points to lead the Spurs.