You are here: Home / Legislature / Transportation funding once again top issue for Wisconsin 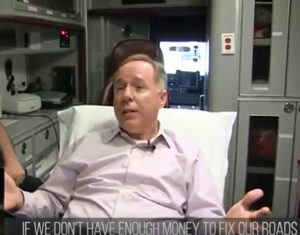 Round two in the state’s ongoing road funding feud is shaping up at the Capitol. There’s a public hearing in Madison Tuesday on transportation funding, an issue that held up the state budget for weeks last session.

Republican Assembly Speaker Robin Vos has released a video of him taking a very bumpy ambulance ride in Racine County. “Some people think our roads are just fine, (but) to people who deal with life or death situations, it makes a big difference,” Vos says in the video.

Republican state Senator Chris Kapenga is not too impressed with the video.

“He’s doing his best to support his position,” Kapenga. “I think people have to be careful. A favorite thing of politicians is to do the scare tactic.” Kapenga and GOP Senator Duey Strobel say the gas tax would have to jump by 28 cents per gallon to cover all of Wisconsin’s road building needs without borrowing.

Kapenga and much of the Senate Republican caucus side with Governor Scott Walker, who has pledged NO increases in taxes or fees to pay for roads, without cuts elsewhere. Walker said that’s a promise he made to voters, and he’ll keep it despite the estimated $1.1 billion shortfall for projects in the next budget.