You are here: Home / News / Walker wants ‘certainty’ about refugees 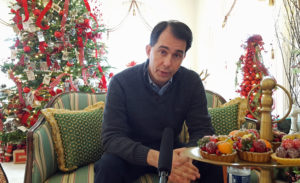 Governor Scott Walker says he wants to have more “certainty” about refugees coming from countries with ties to terrorism.

In a letter to President-elect Donald Trump this week, Walker called for Wisconsin to have a broader role in determining the number of refugees placed in the state and where they come from. Walker said in an interview with WRN that what he wants more than anything is certainty that people being brought into the country as refugees have been properly vetted by the federal government.

Walker pointed to attacks in Europe in recent years as a sign that there have been “real problems” with the vetting process there, which has opened the door for individuals with ties to radical Islamic terrorism to enter those countries. “I think at a time where it’s pretty clear where, at least the spoken word of many of the leaders – be it the Islamic State or other terrorist organizations – are to do harm to America and the American people, the last thing I want to do is make it easier by letting people in…without some sense the federal government has done a proper job of vetting who the people are,” Walker said.

Walker said it should be clear the federal government has made sure terrorist ties don’t exist – which he said is not happening right now. The governor argued there have been many cases where just checks of social media feeds have raised concerns about statements in support of terrorism from individuals who later carried out violent acts.

“It’s incumbent on the Department of Homeland Security to do a better job,” Walker said. “As a governor, I want to make sure that we know that before we see people coming into our state.”