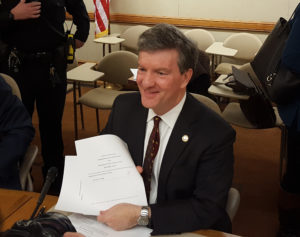 The state’s slate of ten electors met Monday afternoon at the state Capitol in Madison, where they quickly cast votes for Trump and Vice President-elect Mike Pence. The Republican ticket won Wisconsin with about 1.4 million votes, defeating Democrat Hillary Clinton by about 23,000 votes.

Despite subzero temperatures, dozens of protesters marched outside the Capitol building to urge the electors to vote for someone other than Trump or to abstain. Carrying signs with messages such as “vote your conscience,” many urged the Electoral College to recognize that Clinton had won the popular vote on the national level, even if Trump had won the state. “It is the duty of the electors, since basically all other measures have failed, to act as sort of a last stop against allowing someone manifestly unqualified to become president,” argued Daniel Hast of Madison. 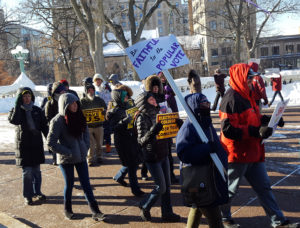 Wisconsin Republican Party Chairman Brad Courtney, one of the electors, said he was proud to be part of a historic moment. “We’re just very excited to be able to represent all the hard working activists around the state who helped deliver this. This hasn’t been done since 1984,” he said.

An overflow crowd packed a hearing room at the Capitol to witness the votes being cast – a process that is typically witnessed by just a few dozen people. As the votes were announced, chants of “shame” could be heard from the crowd, with several audience members shouting warnings about what may come from a Trump presidency as they left the room. “You have sold us out,” said one woman, as she was escorted out by staff, while another warned “We’re all going to go to war and die because of you.”