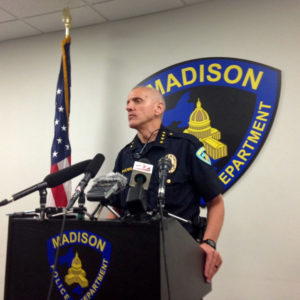 Madison police have identified the suspect in a fatal shooting Wednesday at a group home on the city’s East Side as 25-year-old Ali Hassan of Fitchburg. Investigators believe Hassan was targeting a 23-year-old woman who was killed, and that both were employees of the firm which operates the home, which houses cognitively disabled adults.

A second woman was also struck by gunfire and is hospitalized, listed in stable condition. Police say she managed to call 911 despite her injuries. Hassan was taken into custody shortly after police responded to the call, after his vehicle crashed into a car with a mother and her 7-year-old child inside. Both were unharmed.

Police said Hassan works for the same company that runs the group home, which is for cognitively disabled adults.  A specific motive for the shooting hasn’t been determined.

Madison Police Chief Mike Koval said the shooting occurred at around 7 p.m. The group houses cognitively disabled adults. Koval said the victims were both employees of REM Wisconsin, which operates the group home. Three adults who live at the home were all unharmed.