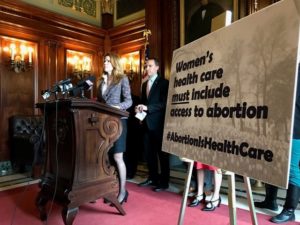 Democrats in the Wisconsin legislature are vowing to defend access to abortion. On Monday, they introduced a resolution affirming abortion as health care. “When abortion is inaccessible – and you can look at any country in the world and see this – women will die,” said Representative Chris Taylor of Madison.

With opponents seeking to prohibit abortions in Wisconsin after 12 weeks, Sara Finger with the Wisconsin Alliance for Women’s Health said it’s a fact that such abortions are safe for women. “Another fact is that the chance of this (resolution) is going anywhere is not great. I recognize that,” Finger said.

Wisconsin already prohibits abortions after 20 weeks — Governor Scott Walker signed that bill into law in 2015. Taylor said Democrats will push back on any attempt at further restrictions, which she claimed are opposed by voters.

“The women and families of this state do not want Robin Vos or Scott Walker or Scott Fitzgerald in the examining room with them,” she said,