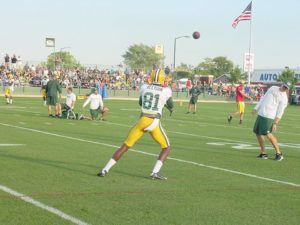 Allison was pulled over by the Wisconsin State Patrol back on September 4, 2016 after being clocked at 81 mph on I-43 near Francis Creek.

The officer who stopped Allison smelled marijuana, but Allison denied smoking marijuana or having an illegal substance in the vehicle.  Allison told the officer the odor was left over from the night before when he was with some people who were smoking marijuana.

A search of the vehicle  turned up  three backwoods cigars on the front passenger seat, two of them filled with a “green leafy material” that reportedly tested for THC.

Allison was placed under arrest and taken to the Manitowoc County Jail where he posted a $100 bond.

Allison makes his first court appearance on January 23 in Manitowoc.

The NFL doesn’t take action on substance abuse charges until after the court case is resolved.  A conviction could lead to discipline from the league under it’s substance-abuse policy.

Allison signed with the Packers as an undrafted free agent.  He’s come on strong in the second half and may be needed to contribute this week after Jordy Nelson went down with a rib injury.