You are here: Home / Packers / Clements not returning to Green Bay 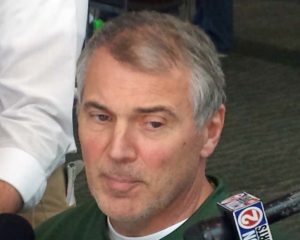 Green Bay Packers coach Mike McCarthy said he had not yet completed a full evaluation of his assistant coaches, but he did announce one change to his coaching staff for 2017.

“Tom Clements is going to move on to some other interests,” McCarthy said on Thursday during his season ending press conference at Lambeau Field.

Clements started with the Packers as the teams quarterbacks coach from 2006-’11.  He was promoted to offensive coordinator in 2012 before being elevated to his recent title in 2015.

Clements called the plays for a portion of the 2014 season before McCarthy relieved him of those duties.  McCarthy resumed play calling and has done so ever since.