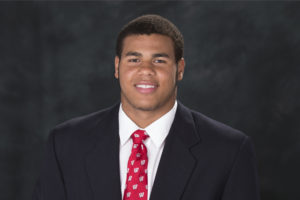 Senior Bart Houston got the start at quarterback and completed 11 of 12 passes for 159 yards.  His only incompletion came when tight end Troy Fumagali dropped a pass in the end zone.  But Fumagali made up for it, catching six passes for 83 yards and a touchdown from Alex Hornibrook.  Fumagali was named the games most outstanding offensive player.

Hornibrook played just two series for the Badgers and was 2 of 2 for 19 yards.

Western Michigan’s offense was one of the top units in the country, averaging 43.5 points and nearly 500 yards a game.  The Badger defense held them to 16 points and 280 yards.  T.J. Edwards not only had the interception, but led the Badgers in tackles with 10.  He was named the outstanding defensive player.

The Badgers  jumped out to a 14-0 lead, putting together scoring drives of 75 and 88 yards.  Wisconsin led 17-7 at halftime and 17-10 in the final quarter before Edwards interception.

Terrell finished 16 of 28 for 157 yards with a touchdown pass and an interception.  Highly touted wide receiver Corey Davis entered the day with 18 touchdown catches and an average of 109.8 receiving yards per game.  He finished with six receptions for 73 yards and a touchdown.

The bowl victory is the third straight for the Badgers and their second under Paul Chryst.