You are here: Home / Legislature / Democrats on State of the State: ‘Wisconsin deserves better’ 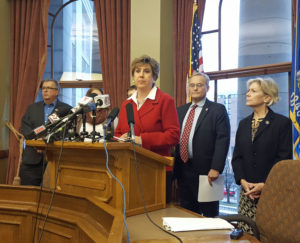 Democrats respond to the governor’s State of the State address. (Photo: WRN)

Democratic leaders in the Legislature are skeptical about many of the proposals Governor Scott Walker outlined in Tuesday’s State of the State address, while Assembly Minority Leader Peter Barca (D-Kenosha) argued the state “deserves better.”

Speaking to reporters after the speech, Barca also questioned how the governor plans to pay for a proposed tuition cut for in-state University of Wisconsin students. “The problem has been that he’s never funded the freeze, so I can’t imagine he’s going to fund a decrease in tuition,” Barca said.

Walker touted a four year tuition freeze for UW students in his speech, and said the next stage is to cut. Republican leaders were also skeptical about whether the plan is viable in the upcoming budget debate.

Senate Democratic Leader Jennifer Shilling (D-La Crosse) raised doubts about a pledge to increase funding for K through 12 education. “When he talks about education, it’s more money into choice…and that’s at the cost and the expense of our public schools,” Shilling said, referencing previous comments the governor has made about increasing funding for education in the state.

While the governor urged lawmakers to approve a broadband expansion bill in his State of the State address, Sen. Janet Bewley (D-Ashland) said he still failed to give residents of northern Wisconsin hope for what help is in store for them on transportation. “He needs to put himself in their shoes, and understand what it feels like to wake up in the morning and not know if the road that you want to drive on to get to work is going to be safe – if the school bus is going to be able to make it over that bridge.”

The Ashland Democrat said the governor needs to make sure Northern Wisconsin looks like the rest of the state.

Democrats face a two year session at the Capitol where they will have their smallest membership in both chamber in decades. Still, leaders have pledge to be a vocal minority in the months ahead, especially during the upcoming budget process.