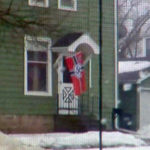 A Nazi flag flown at a Oshkosh duplex has puts a family who lives there in fear. The flag has been taken down, but a photo shared online has led to threats being made to a neighbor. Rosangela Diaz shares the duplex with the person who put up the flag. She said her family, including four children, no longer feel safe.

“There’s people from across the world who are threatening us.” she said.

State Representative Gordon Hintz, who represents the district where the flag was displayed understands the outrage, but says that Diaz and her family are victims.

“I think we’re are an open and a tolerant community, and we just don’t accept that,” he said. The tenant flying the flag has not commented to the media.