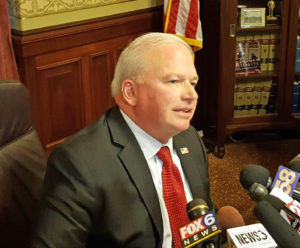 As a new legislative session gets underway at the Capitol, the Republican leader in the state Senate says legislation dealing with economic development and loosening regulations on high capacity wells are among the issues the majority may take on right away.

“Some of it is clearly items that we think need to be revisited,” Senate Majority Leader Scott Fitzgerald (R-Juneau) told members of the press Tuesday, shortly after lawmakers were sworn in at the Capitol.

High capacity well legislation passed the Senate last session, but died in the Assembly after lawmakers were unable to reach a compromise. The legislation is key to parts of the state that are heavily reliant on agriculture and are facing difficulty with access to water supplies. Fitzgerald said “it’s an issue that’s been hanging on there that needs to be addressed.”

As for other bills lawmakers may take up early on in the year, Fitzgerald said a lot of that may depend on what happens at the federal level. He’s also told members to have ideas ready to go as they return to the Capitol, and has urged to be ready to discuss proposals that may not have been “ready for prime time” during the last legislative session.

Fitzgerald also signaled some support for other proposals making their way around the Capitol. On a possible Assembly bill that would split up the Department of Natural Resources into separate resource management and environmental protection agencies, the Juneau Republican said his members will have an “open ear” on the subject.

When asked about a report released by the Department of Transportation last week that indicated tolling could help the state raise billions of dollars, Fitzgerald said he was surprised by the high cost of implementing a system in the state. Still, he said it’s an issue that’s not likely to go away soon, with the state facing a $1 billion shortfall in the transportation fund, and it’s not something that should be taken off the table. “It’s something that should be discussed,” he said.

The Senate and Assembly both opened their legislative sessions on Tuesday, with Republicans returning one seat stronger in each chamber. The party holds a 20-13 seat majority over Democrats in the Senate.