You are here: Home / Legislature / Governor Walker reschedules his State of the State address 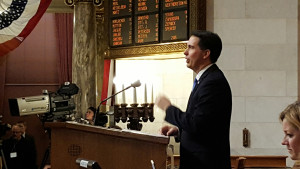 Gov. Scott Walker delivers his 2016 State of the State address.

The governor is moving up the time for his annual State of the State address.

While the speech is traditionally scheduled during the evening hours at the Capitol, Governor Scott Walker now plans to deliver the annual address to the Legislature next Tuesday at 3 p.m.

The decision comes just a week after Walker had initially requested a joint session of the Legislature for 7 p.m. on January 10.

The governor’s office said the change was made out of respect for President Barack Obama’s farewell address to the nation, which is scheduled to take place that evening.