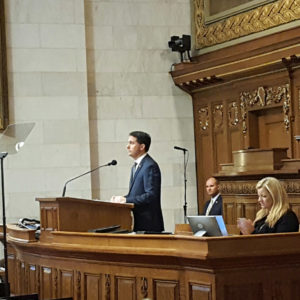 The governor has requested a joint session of the legislature at 4 p.m. on February 8, where he will outline his proposal for the state’s next two-year spending plan.

Walker has been previewing aspects of his budget, which is expected to include a tuition cut for University of Wisconsin students and a series of welfare reforms. It will also show how the governor plans to deal with a $1 billion shortfall in the state’s transportation fund – a issue that’s likely to be a strong point of contention during budget talks with lawmakers.

After Walker introduces his plan, lawmakers traditionally hold a series of public hearings on the proposal around the state. The Joint Finance Committee then begins making changes later in spring, before the full Legislature votes on the budget.