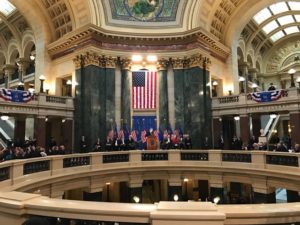 The Wisconsin state Capitol is 100 years old this year. The iconic building is a showcase now, but former Governor Tommy Thompson says that wasn’t always the case

“(Former governor) Lee Sherman Dreyfus got elected, and he said – quouting Betty Davis- ‘what a dump,'” Thompson told a crowd gathered in the rotunda for the 100th Anniversary State Capitol Commemorative Commission Kick-off Celebration on Tuesday.

“For those of us who work here, for those of use who serve here, for those who just come in and visit, whether it be to petition our elected officials, to work on official business, to protest or do whatever else is allowed under our great democracy, sometimes we take if for granted, the beauty and wonder of this structure and the important work that’s done here,” said Governor Scott Walker.

You can learn more about the Capitol celebration on-line at Capitol100th.wisconsin.gov.”