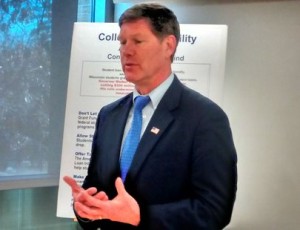 Congress has cleared the way for repeal of the Affordable Care Act — but what happens next is unclear. Last week Republicans in the Senate and House passed resolutions paving the way for Obamacare repeal.

“I think it’s incumbent upon them, since they’ve had seven years now, to come up with a plan that would ultimately replace the Affordable Care Act before they move forward on repealing it,” said U.S. Representative Ron Kind, a La Crosse Democrat.

President-elect Donald Trump said in a weekend interview with The Washington Post that he is nearing completion of a plan to replace the ACA with the goal of “insurance for everybody.” Trump also said he would force drug companies to negotiate directly with the government on prices in Medicare and Medicaid.

Kind said his Republican colleagues should admit there are parts of Obamacare that work. “There are also things that we ought to be working together on, such as containment of health care costs, rising drug prices, making sure that the health insurance marketplaces are more competitive, and figuring out creative ways to get younger, healthier people into the health insurance market.”

No Democrats voted for a House resolution instructing committees to write legislation repealing the law. “It would be incredibly irresponsible for them to move forward on repeal without any alternative,” said Kind.