You are here: Home / News / Madison officials speak out against ‘sanctuary city’ order 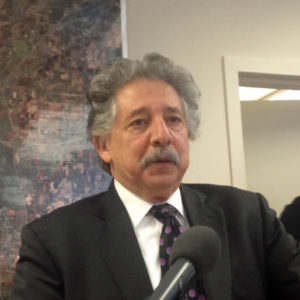 Madison’s mayor and police chief are speaking out against President Trump’s executive order on immigration enforcement.

The order signed this week threatens to withhold federal funding from so-called sanctuary cities. While not currently defined under federal law, the term typically refers to cities that do not allow local resources to be used to enforce immigration laws and shield people from deportation.

During a news conference on Thursday, Madison Mayor Paul Soglin said the city will cooperate with federal officials when required to – but that does not include asking people about their legal status. “We will not use our local police department as a tool to enforce federal immigration laws,” Soglin said.

Police Chief Mike Koval said his officers will continue to operate as they always have, to maintain trust and safety in all communities. “The Madison Police will not be doing anything different than what we’ve done before,” he said.
Koval said that includes having his officers asking people the interact with about their immigration status.

Soglin said it remains unclear if Madison will fall under the definition of a sanctuary city, once a standard has been set. He promised to “vigorously contest” any attempt to deprive the city of funding though, which could include legal action.