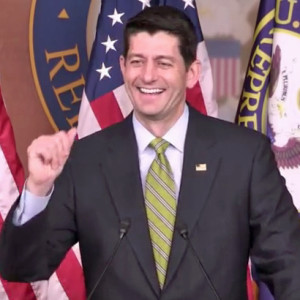 Wisconsin’s Paul Ryan received near-unanimous support from his fellow Republicans to be reelected as House speaker Tuesday. Representative Thomas Massie of Kentucky was the only Republican not to cast a ballot for Ryan, voting instead for Representative Daniel Webster of Florida. Massie, invoking a campaign slogan used by president-elect Donald Trump, said Webster would “drain the swamp.”

The majority of House Democrats voted for Representative Nancy Pelosi of California.

Ryan’s reelection came less than two hours after Republicans held an emergency meeting to reverse proposed changes which would have eliminated the oversight role of the independent Office of Congressional Ethics. Ryan opposed those changes ahead of a Monday night conference meeting, but House Republicans voted for them anyway – then agreed to reverse course Tuesday after critical media coverage.

Ryan secured all but 9 Republican votes when he was elected as the first ever House Speaker from Wisconsin in 2015, succeeding John Boehner of Ohio.