You are here: Home / Legislature / Speaker Vos says Republicans not rushing on priorities 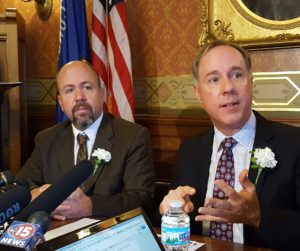 As lawmakers return to the Capitol for the start of a new legislative session, Republican leaders in the Assembly are indicating they want to take a more thought-out approach to tackling some of the big issues facing the state.

“I think the decision our leadership team has made is to not rush in to any package of bills that we’ll bring to the floor right away,” Speaker Robin Vos (R-Rochester) told reporters Tuesday afternoon, ahead of the start of the state Assembly’s 103rd legislative session.

Vos and Assembly Majority Leader Jim Steineke (R-Kaukauna) both indicated that, while issues such as dealing with a $1 billion shortfall in the state transportation fund and reexamining funding for public education are on their radar, no single bill has emerged yet as the first piece of legislation that will be introduced. “There are a lot of big problems that we want to tackle, that we don’t necessarily have AB1 written,” Vos said.

Vos also addressed a number of more controversial proposals that are likely to come up in the coming session – such as allowing concealed carry permit holders to have weapons on public university campuses or any potential push to legalize medicinal marijuana in the state. While he signaled there is room for discussion on many proposals, the Rochester Republican stressed that it’s up to the lawmakers proposing those ideas to make sure they have support outside of the Capitol. “It is the job the legislator – Democrat, Republican, Senator, Representative – who introduces an idea to go out and sell it to the public,” Vos said.