You are here: Home / Crime / Courts / State reaching out to sexual assault victims with untested kits 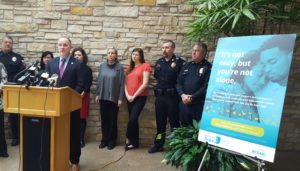 The state Department of Justice is reaching out to victims who may still have an untested sexual assault kit being held somewhere.

More than 6,000 of those kits are sitting untested across the state, either in law enforcement custody or at a hospital, and may be tied to cases where other evidence resulted in a conviction or where the victim opted not to pursue charges. The state has received grants to help address the backlog, although Attorney General Brad Schimel believes victims should have a say in what happens next. “They have a right to a say in what happens in their future…the evidence that is collected is collected from their body, we cannot ignore their wishes in this,” Schimel says.

The state Department of Justice and Wisconsin Coalition Against Sexual Assault have launched a website and hotline, which victims can use to track down their sexual assault kits and find out what options are available for either testing or disposing of it. Schimel says they are hopeful that every person who had a kit collected, and doesn’t know what happened with it, will contact the state.

WCASA executive director Pennie Meyers says they want those victims to have a choice in what should happen with that potential evidence. “It is important to remember that behind each kit is a sexual assault survivor.”